The bridge carrying Route 7 northbound over Grays Bridge Road and the Still River in Brookfield is being renamed.  The infrastructure will be designated as the "Governor M. Jodi Rell Bridge" under a transportation bill approved in the final hours of the General Assembly session this week.  Brookfield Representative Steve Harding noted that the former 107th District House member is still a resident of the town and worked tirelessly to make something happen that many people didn't think was possible.  He notes that she was able to cut the ribbon the Super 7 expansion northbound into New Milford.  Harding called it fitting that the bridge going northbound will be named in her honor.

The Danbury Department of Public Health is reporting very low numbers of positive COVID-19 tests.  Last Saturday there were no reported cases.  For June, through Wednesday, the City reported just 23 positive cases.

The Connecticut Department of Public Health has released its weekly COVID-19 Alert Map. No municipalities are in the red zone, the highest of the state’s four levels for community spread.  Most have fewer than 5 cases in the last two weeks reported, but 5 municipalities had between 5 and 9 cases during that time.

New Milford Mayor Pete Bass says the town will host a proper Flag Retirement Ceremony for worn and tattered US Flags.  Anyone with a Flag that needs to be disposed of can drop it off at Town Hall across from the Mayor's office or at the VFW.  The ceremony is set for June 18th at 6pm at Clatter Valley Park.

Members of the Bethel Fire Department hosted a special training this week put on by the Metro North Railroad Fire Department to learn about how to handle emergencies safely on the tracks.  Of all of the MTA rail lines in Connecticut, the Danbury extension has the most roadway crossings at 36.  Firefighters from nearby departments and agencies also attended the training session to learn this safety information.

Today marks the 209th birthday of Putnam County.  The annual observation of Putnam County Day at the Historic Courthouse has been canceled again this year due to COVID-related restrictions.  A virtual celebration and outdoor exhibit on the steps of the Historic Courthouse has been put on display for the occasion. The Historian’s Office has been working with museums, schools and Carmel’s Boy and Girl Scouts to assemble a video program and an outdoor exhibit which focus on the presence of the American Flag in local history.

The state Department of Public Health has issued a warning about several cases of lead poisoning from ceramicware pots sold at CTown Supermarkets.  Two children and an adult have gotten lead poisoning.  There are CTowns in Danbury, Stratford, Meriden, New Haven, South Norwalk, Hartford, East Hartford and New Britain.  The products are not intended to be used for food contact and cooking and are only to be used for decorative purposes--and must be labeled as being only for decorative use.

A proposal to demolish an existing firehouse and construct a new on in Redding has been tabled by the Zoning Commission.  They met this week for a public hearing about the site plan approval for Black Rock Turnpike, but put the discussion on hold until their next meeting.

The Conservation Commission has signed off on plans.

The current firehouse was built in 1927 for a horse-drawn wagon fire company, with additions and renovations over the decades.  A structural engineer has determined that the foundation is falling apart and it would have cost more to renovate the existing facility than to build from new.

Plans call for 15,000 square feet in a farmhouse-style building with modern amenities.  Larger training and administrative spaces would be located on the second floor, along with overnight suites.  The lower level would serve as a storage area  and supplementary training section.

A New Fairfield Police Officer has rescued a child from a car after her parent accidentally locked the key inside.  The officer was called to the scene around noon on Wednesday and arrived within minutes.  He was able to safely open the vehicle. The mother expressed her gratitude for getting the child out safely and, afterward, the officer showed off his police cruiser for the child.

Danbury will be receiving more state funding in the two-year budget approved by the General Assembly this week. Danbury Representative David Arconti says the City's delegation secured $5 million more in education funding, and $7.5 million more in municipal aid to repair roads and infrastructure. Danbury PAL will be receiving a $140,000 grant under a state bonding bill approved in the final hours of the session.  Arconti says the new budget supports small businesses, economic growth, education, and does not include any tax increases.

4th District Congressman Jim Himes was in Ridgefield yesterday.  He stopped by A Contemporary Theatre of CT to see how the organization is using Paycheck Protection Program to continue operations as the state comes out of the pandemic. Himes also heard how CARES Act dollars have helped keep their doors open and received an update on the Shuttered Venues grant application process. Himes also took a walking tour of Ridgefield businesses yesterday.  He was joined by First Selectman Rudy Marconi downtown to visit businesses that have benefited from federal assistance during the COVID-19 pandemic.

Danbury Police Chief Patrick Ridenhour has become the first African American to lead the Connecticut Police Chief’s Association.  The new role took effect yesterday.  The organization is dedicated to ensuring that all are treated equally before the law. The group's mission statement also says they are dedicated to enhancing the quality of life of state residents and aiding other government bodies in the administration of justice.  Outgoing President, Stonginton Chief Darren Stewart says Ridenhour has played key roles in developing new training and working with lawmakers.

An internal affairs investigation has been launched by Danbury Police into a disturbance complaint Wednesday at Danbury Library.

A library security guard is seen asking a person to leave because he was taking video, which is against library policy.  The man says he's working on a story and exercising his First Amendment rights.  Danbury Police were then called to respond.

The man refuses to show police his ID and was told that he could be arrested for trespassing.  Eventually, the man provided ID and left, being told the citation would be sent in the mail.

Chief Patrick Ridenhour says it's fortunate that there were no arrests or injuries, but he is concerned about how the incident was handled by the responding officers and supervisor.  The Internal Affairs Division will review any applicable laws, analysis of the video as well as footage from recently purchased body cameras.

Once the investigation is complete, Ridenhour says they will take the appropriate action based on the findings.

In Danbury, International Drive was closed between Federal Road and the Eagle Road overpass in the afternoon due to a derailed train car.  Three train cars carrying garbage from a processing center jumped the tracks, but remained upright.  There were no spills or injuries. 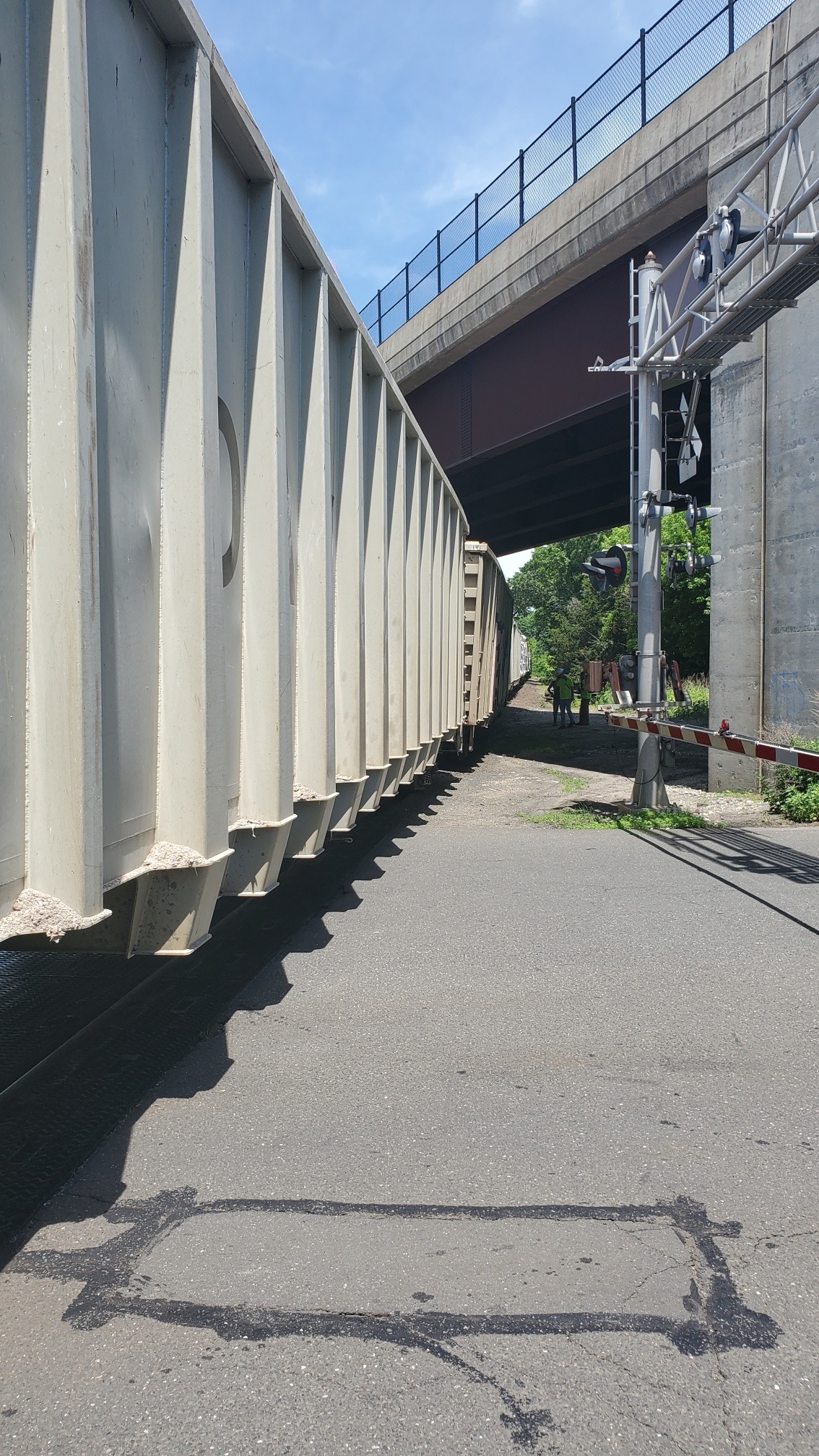 In Bethel, a sinkhole was discovered under the Metro North grade crossing on Greenwood Avenue.  The road will be closed through the weekend as engineers replace track, ties and grade crossing plates.

The ban on alcohol is in effect until August 25th.

In recent summers, including last year, these locations have experienced increased crowds and alcohol consumption, which led to increased incidents of misconduct, unruly behavior, property damage, trespass, and complaints by other visitors and the surrounding communities.  The ban will help DEEP law enforcement dissuade inappropriate use of and reduce negative behaviors in recreational areas.

In the waning hours of the Legislative Session, the House and Senate overwhelmingly passed a state bonding package that funds a number of projects including the Sandy Hook Permanent Memorial.  A $2.6 million grant was approved for the project, which Newtown residents recently signed off on, with a $3.7 million budget.  Representative Mitch Bolinsky applauded the move saying he was truly touched that the Governor and the Speaker of the House thought of Newtown and acted to help have a place of beauty intended to recall, honor and continue the process of healing.

The Bethel Board of Finance has approved allocating $300,000 toward the purchase of land on Shelly Road as open space.  The Bethel Land Trust says the parcel is a mix of mature hardwood forest and wetlands.  It borders both the Franc Preserve and Newtown’s Brunot Preserve.  The construction of two apartment buildings was proposed for the property, which extends close to the Franc Preserve’s red trail.  The proposal was made to have the Town of Bethel purchase the land to protect it and enhance the Franc Preserve.  $200,000 from Bethel's open space fund will also be used to complete the purchase.

The state Senate has passed a bill that would update Connecticut's domestic violence laws.  Redding Senator Will Haskell says the measure preventing domestic abuse would allow more favorable and fair treatment of survivors in need of a restraining order. If signed into law by the governor, Connecticut would join at least 17 other states that already incorporate more than just physical violence into the criteria necessary for issuing a restraining order.  Haskell says this legislation because it creates a safer and more modern restraining order process, allowing survivors to email the forms needed to serve a restraining order on the alleged abuser. Currently, the forms must be physically delivered by the applicant to the courthouse. The bill also allows survivors the option of testifying remotely in court proceedings -- and not in presence of their alleged abuser—if they have a hearing for a restraining order, a protective order, or a standing criminal protective order.

A sinkhole was discovered under the railroad track eastbound lane of the grade crossing in Bethel.  Greenwood Avenue in Bethel is closed between Library Place and Blackman Avenue while Metro North makes repairs to the railroad crossing. Drivers should use South Street as a detour.  First Selectman Matt Knickerbocker says this will be an extended closure, likely through the weekend.  The repair requires the removal and replacement of about 30 yards of track, ties and grade crossing platforms.  Metro North is running substitute bus service between Danbury and Redding, with train service running between Redding and South Norwalk as normal.

No appointment is needed for the 2nd dose Pfizer shot or the one-dose Johnson and Johnson shot at Danbury Library until 5:45pm.  People can get the 1st dose of Pfizer, but appointments for the second dose will need to be made at another location.

Connecticut's daily COVID-19 test positivity rate is .81 percent.  Out of more than 13,000 antigen and molecular tests reported to the Department of Public Health, 108 came back positive.  The number of people seeking hospital treatment for COVID-19 climbed up a bit yesterday, by four.  There are 76 people hospitalized.

A local lawmaker is critical of the highway use fee on tractor trailers, approved in the final hours of the legislative session yesterday.  Brookfield Representative Steve Harding says there was significant opposition to the measure to tax trucks based upon their weight and distance traveled.  He was disappointed that an amendment failed, which would have moved several transportation-related return revenue streams from the General Fund back to the Special Transportation Fund.  Another failed amendment would have given an exemption to any truck used for retail or wholesale food delivery, agricultural commodities, or farm supplies.